Microsoft Windows 8 is due for release at the end of 2012 and Microsoft have already released a couple of publicly available pre-release versions. The most recent version is called the Consumer Preview and has been available for a few months. We decided it was time to see how Optimumcut-1D v3 in its current form handles Windows 8. We are not going to review Windows 8 here because there are hundreds of other reviews on the Internet. If you have yet to read anything about the fundamental changes in Windows 8 then a good place to start is Paul Thurrott’s supersite for Windows.

Our first stumbling block is based on a decision we took to build Optimumcut-1D on top of the Microsoft .NET framework v2. This decision was taken because several features we wanted to use were introduced in .NET v2 which precluded v1.0 and v1.1. This left us with the decision of v2.0, v3.0, v3.5 or v4.0. All additinal feature Microsoft added to the later versions were only in our ‘nice to have’ category. Our decision therefore came down to how many customers had which versions installed. As you can see from the graph below, if you target v3 or below then at least 90% of potential customers will have the framework pre-installed.

Installed numbers are only part of the equation, the other is the download size of the framework.

Once we had decided on v3.0 or earlier, our choice was left to:

By choosing .NET v2 we were confident that over 90% of our users would have the framework pre-installed and those that didn’t would only have a maximum additional 22MB to download. This decision was made before any knowledge of Windows 8.

Windows 8 will not allow our installer to run the 22MB .NET v2 installer. During the installation it pauses at this point. 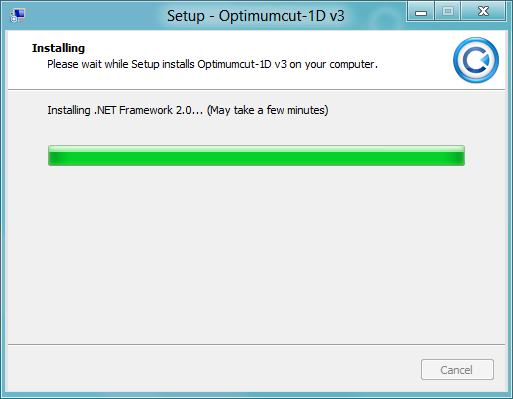 Windows 8 intercepts our installer and directs the user to add a new Windows Feature for .NET Framework 3.5. 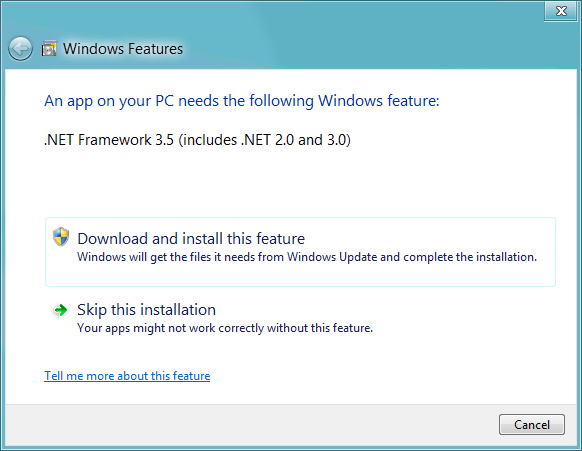 As far as Microsoft is concerned, there is no reason to only install .NET v2 so it prompts you to install the full v3.5 which includes v2.0 and v3.0. The downside to this is that v3.5 is about 200MB in size.

Windows 8 comes with .NET v4 pre-installed so we might need to re-evaluate our original decision to base Optimumcut-1D v3 on .NET v2. After Windows 8 has been fully released we might release a .NET v4 version.